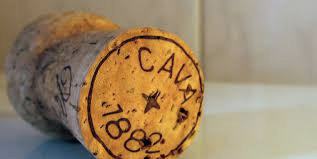 Written by Marie Servagnat on November 8, 2013

Let it be said, Champagne has competitors ! Cava is one of them! Sparkling wine which can be considered as a kind of Spanish champagne is on the rise since its sales make a face in the champagne market.

The Cava is made in a very traditional way, with a double fermentation in the bottle. Its name is of Catalan origin and symbolizes the underground place that is used for the conservation or aging of wines, this term comes etymologically from the Latin word caves.

Spanish sparkling wine, it is produced in the regions of Catalonia, Aragon, Basque Country, Navarre, Valencia, La Rioja and Extremadura. But most of the Cava production is located in Catalonia (northern Spain).

Made from Macabeo, Xarel.lo, Parellada, Malvasía, Chardonnay, Grenache, Monastrell, Trepat, and Pinot Noir grapes, it would be similarly comparable to champagne according to many champagne lovers (we look forward to tasting it and making you discover this tasting of "Spanish champagne"), it is a little brother of our favorite elixir, since it is aged in the same way and is nevertheless more fruity than it and also sweeter in general.
The European Union recognizes Cava as AOC Cava, and its production is overseen by the Cava Regulatory Council, the Consell Regulador del Cava. Its origin dates back to 1959, when the Regulations on the trade in sparkling and semi-sparkling wines were put in place. The wines that have been highlighted give way to the term Cava for the first time.
A subsequent ordinance of the Ministry of Agriculture dated April 23, 1969 determines the rules for sparkling and semi-sparkling wines (non-still wines), and Cava was recognized as one of the sparkling wines produced using the classic fermentation system. in the bottle and aging technique.
In 1972, when the ministerial decree dated July 27 was promulgated and the Sparkling Wine Regulatory Council was set up, operating similarly to the appellation of origin. This provision is also the subject of its own regulations regarding the production and marketing of Cava.

Cava comes out of the shadows

Cava was in 2009 the most widely distributed sparkling wine in the world and far exceeded sales of Champagne for the first time in history in the export figures of non-still wines. According to data processed by the Cava Regulatory Council, in 2009, a total of 219 million bottles were sold, of which 88 million were intended for the domestic market (0.98% less than in 2008) and approximately 131 million were distributed in overseas markets, which means a decline of 5.5% compared to 2008. Despite these negative results, Cava is the most exported and ousted its direct competitor, Champagne, whose sales data have seen a sharp drop of 20.45% compared to 2008, since in 2009 it reached 112 million bottles.

The 5.5% decrease in foreign sales of Cava compared to 2008 was mainly caused by the sharp decline in the German market, which ranks first in the list of Cava and importing countries in 2009 experienced a 32.10% drop in imports of this product. Likewise, Japan, in fifth place in the list, experienced a decline in real imports from 2008 to 2009 by 23.53%. It should be noted that both countries had a negative number in total wine imports during the year 2009.

For its part, Cava has reaped good results in countries like Great Britain, the largest country in the list, with 32 million bottles sold in 2009 had an increase of 7.79%, and especially in Belgium , where Cava imports increased from 2008 to 2009 in% 57.57 for the 15 million bottles.

Sales recorded in the United States remained stable with a slight increase of 2.26% (14 million bottles sold in 2009), highlighting in particular the increase of 40.23% in the French market where it sold more than three million bottles of Cava.
In terms of total production figures, Champagne continued to be at the forefront in 2009 with 293.3 million bottles distributed mainly in the local market (181 million, up 61.7%). The vein for its part had a total production of 219 million bottles, and spent about 60% of it in international markets. This shows the strong commitment of the Catalan Denomination of Origin to further develop the potential of wine for export.

Gustavo Garcia, President of the Cava Regulatory Council, presenting the results, explains: "The data presented demonstrates the potential to penetrate the international market in the long term, taking the first place in the ranking of names of Spanish origin.".[sources of available figures via Todovinos]